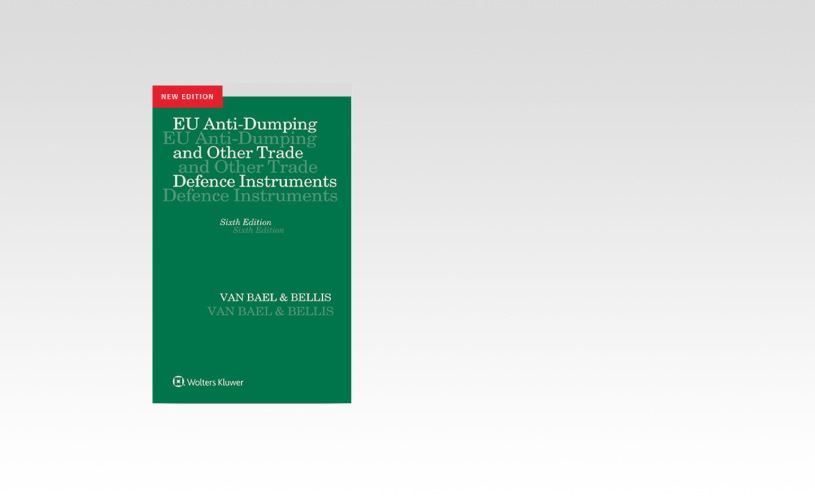 The definitive book on EU trade defence law appears in a fully updated sixth edition. As comprehensive in its coverage as its predecessors, this new edition of the Van Bael & Bellis book on “EU Anti-Dumping and Other Trade Defence Instruments” provides incisive analysis and critical commentary on all relevant aspects of the EU trade defence instruments as actually applied by the EU Institutions against the backdrop of WTO law. The book covers every issue likely to arise in any trade defence matter and examines the numerous cases decided under the EU anti-dumping, countervailing, safeguard and trade barriers regulations, including all of the following and more: • determining the dumping and injury margins; • rules for the determination of permissible adjustments; • clarification of the terms ‘significant distortions’ and ‘distortions on raw materials’; • determining the subsidy margin; • determining the causal link between dumping or subsidy and injury; • determining if “Union interest” calls for intervention; • examining the differences between anti-dumping and anti-subsidy legislation; • procedural rules applicable to complaints, initiation of proceedings, investigations, protective measures, reviews and refunds; • conditions for accepting an undertaking; • measures that may be taken to prevent ‘circumvention’ of anti-dumping or countervailing measures; • rules governing the standing of various interested parties before the European Courts; • allocation and administration of quantitative quotas; and • surveillance measures. As a detailed and practical commentary on the relevant aspects of the EU trade defence instruments as actually applied by the EU institutions in the light of WTO law, the sixth edition of this book remains without peer as a guide to EU trade defence law. To order a copy of the book from Kluwer, click on this link.